Saint Matthew’s Church is proud to exhibit one of the finest collections of Tiffany Stained Glass on the East Coast.  Please feel free to visit our Church and enjoy the spiritual quality of this glass, or come join us as part of our worshipping congregation.

All of our windows tell the story of the Life of Jesus, beginning at the back of the church with the Rose Tiffany Window of the Nativity.

Beginning at the Baptismal font and moving to the back of the Church, the windows show these scenes:
Baptismal Font:  This typical Tiffany style window features the flowers and water motifs that are so famous in Tiffany glass.  The scene shows us the River Jordan where Christ was baptized. 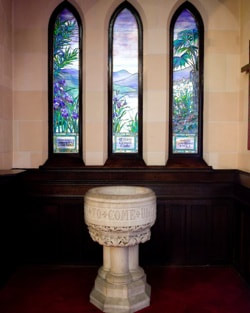 “Let the children come to me”:  Here Jesus welcomes the children of Galilee, who the disciples were trying to keep away from Jesus.  They figured He was too busy for them.  Jesus then taught the disciples that they would need to become more like children in their love and faith to enter the kingdom of heaven.  Jesus is shown with His hands on a child’s head, in much the same position as when we receive the laying on of hands by a Bishop in the sacrament of Confirmation. 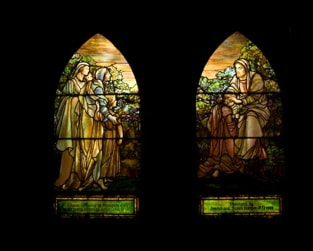 Our Lord’s Baptism:  St. John the Baptizer stands at the Jordan River along with Jesus.  Note the beam of light coming from heaven, a sign of God’s voice which proclaimed, “This is my Son with whom I am pleased.” 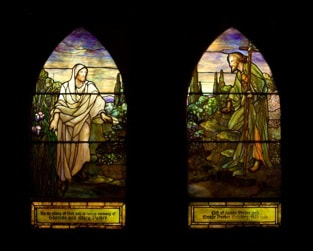 Jesus in the Temple:  When Jesus was twelve years old he became separated from his parents on a trip to Jerusalem.  They found Him days later, teaching in the Temple.  When asked where He was, Jesus responded, “Did you not know I would be in my Father’s house?” 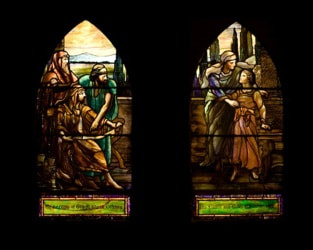 The Calling of St. Matthew:  Jesus stands before Matthew the tax collector and says simply, “Follow me”.  The coin bag or money box shown on the table are commonly used as symbols to designate Saint Matthew in the sacred arts. 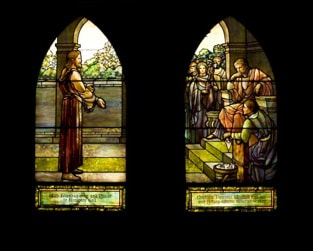 The Good Shepherd:  Jesus is the Good Shepherd who calls His flock by name and cares for each one of them, even when it gets lost.  The image of Jesus as our Good Shepherd reminds us of another shepherd, David, who wrote Psalm 23:  “The Lord is my shepherd.....” 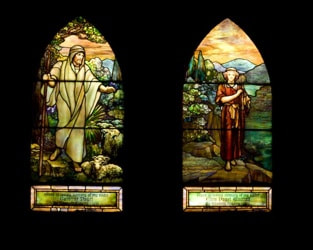 Jesus before Pilate:  After his arrest, Jesus was tried before Pontius Pilate and sentenced to dies upon the cross.  Pilate agreed to the request of the Jewish leaders to have Jesus killed, and washed his hands of Christ’s blood - a symbolic way of saying he was not going to be responsible for an innocent man’s death. 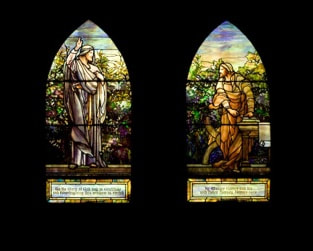 The Angel greets Mary:  Following our Lord’s death, Mary Magdalene and Mary, the mother of Jesus, went to the tomb to prepare Jesus’s body for burial.  Early in the morning we now call Easter they were greeted by an angel who said, “He is not here, He is risen.”  The frightened women ran back to tell the disciples the Good News (what the Greek word Gospel means in English), but the disciples refused to believe them, dismissing the story as an idle tale.  Not until the disciples saw Jesus for themselves would they believe. 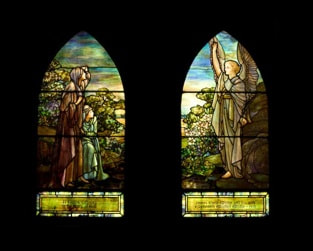 ​
Above Pew Level:  Beginning at the font, the smaller clerestory windows along the side of the Church depict the following symbols of Christian faith: 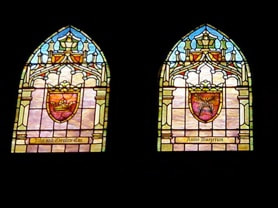 1.Baptismal font, where we are baptized in the name of the Father and of the Son and of the Holy Spirit.
2.Three fish forming a triangle, a symbol of the Trinity.  The fish was a common symbol for the early Christians, the Greek word for fish uses the first letters of the words: Jesus Christ, Son of God.
3.Dove with an olive branch, and
4.Tongues of Fire - both are symbols of the Holy Spirit.
5.An Easter lily, for the resurrection of Christ.
6.An olive branch, again a reminder of eternal life.  Olive branches may live for centuries, die, then have new shoots come out of the same trunk.  The tree then seems to “live again”.
7.Palms from Jesus’s entry into Jerusalem on Palm Sunday.  The palms symbolized the Christ’s role as King.
8.A Crown for Jesus who was and is the King of kings.
9.Lion of the resurrection who opens the seal on the book of life (Revelations 5:5)
10.Lamb of God with banner of Triumph, also an image of  resurrection and victory seen in Revelations.
11.Nails, symbolizing Jesus’s painful death for us.
12.Crown of Thorns, used to mock and hurt our Lord at His trial and while He was on the cross.
13.Wheat, for the bread of communion and
14.Grape Vine, from which we receive wine.  Both the bread and wine become our spiritual food and drink - the Body and Blood of Christ.
15.IHS - the monogram for Jesus, in Greek IHS are the first three letters of Jesus’s names
16.Chalice, from which we taste the fruits of God’s grace and His forgiveness as we remember Christ’s blood shed for us.


Near the Altar, there are two more modern windows showing St. Paul and St. Matthew.  St. Paul has a sword in his hand and a book on the shield at his feet.  The book reminds us of Paul’s letters which form a large portion of the New Testament.  The sword is symbolic of Paul’s death as a martyr.  St. Matthew has a pen in his  hand showing him to be the author of one of the Gospels, and on the shield at his feet is the money bag which reminds us of his initial calling as a tax collector. 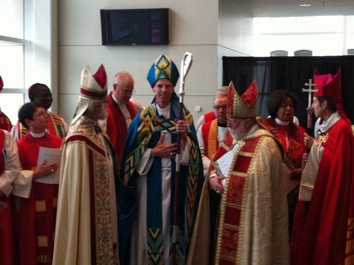 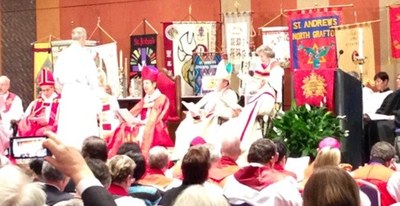 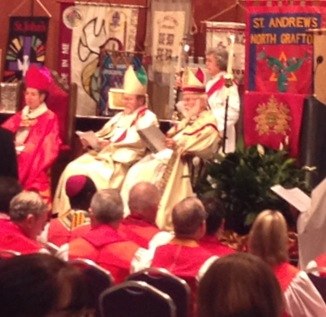 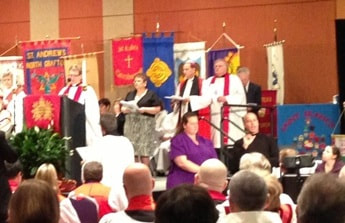 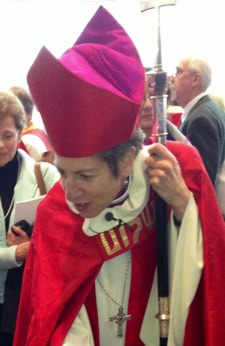 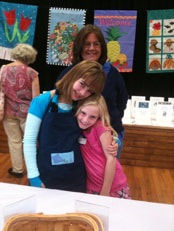 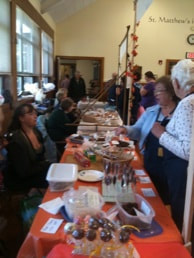 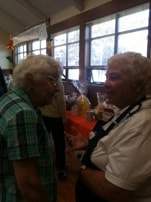 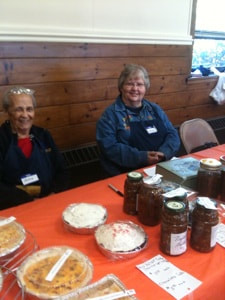 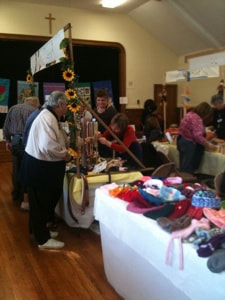 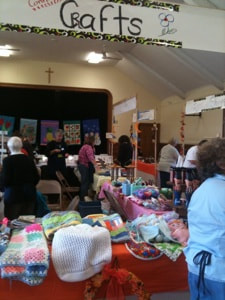 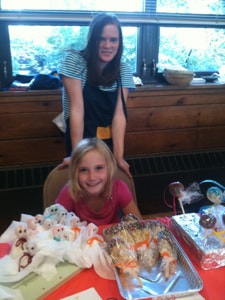 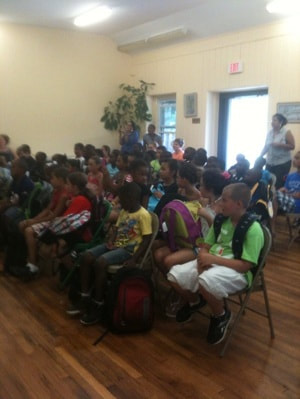